Norled has signed an agreement with LMG Marin to deliver design for two double-ended ferries that Norled will operate on Finnøysambandet in Ryfylke from 2022. The ferries, which will have a capacity of 199 persons and 60 cars, will be built by Ada shipyard in Turkey. The ferries are initially designed for biodiesel operation, but the ambition is to upgrade one of the ferries through the construction phase to be hydrogen powered. LMG Marin's work includes a complete class package including the design of hydrogen solution.

Earlier this year, Ada signed a contract for the construction of these two ferries for Norled, based on LMG Marine's design LMG 60-DE(H2). Construction is now underway, and the first steel cutting took place a few weeks ago.

"The new ferries will be equipped with a diesel-mechanical plant, which is also prepared for hydrogen operation, whereby the diesel engines will then be used as backup power. Norled has won the relevant tender based on biodiesel operation. But we consider to upgrade one of the ferries to hydrogen if the Flagship project supported by the EU concludes on a technical / economically feasible solution", says Norled Sigvald Breivik, Technical Director at Norled.

With the assistance of Maritime Cleantech and in collaboration with LMG Marin and others, Norled has received funding from the EU of up to NOK 20 million to realize this hydrogen solution. “Finnøy” ferry is included as one of two cases in the Flagship program, in which LMG's Toulouse office is involved in the second case (hydrogen powered push barge for the French shipping company CFT).

"This is an exciting project where the development of hydrogen solution goes in parallel with other design work and is carried out following a risk-based design process together with the shipping company, selected suppliers and specialist expertise in hydrogen", says Torbjørn Bringedal, general manager of LMG Marin. 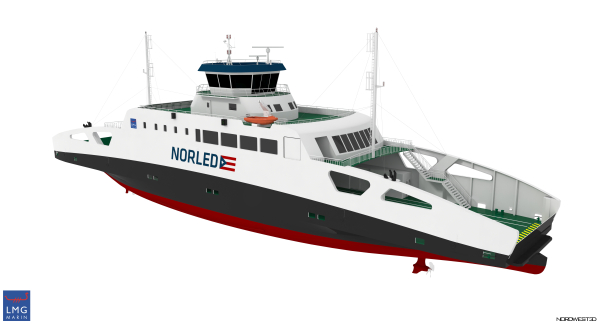